I Hear The Angels Speaking

All right, maybe you'd rather have somebody else read the story to you.  Mike Dent, of OtakuUSA magazine, is happy to oblige. He's put together a roughly 20-minute pilot segment for an audiobook version of Daatipea no Daibouken. 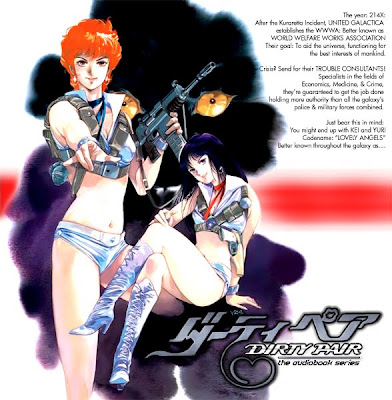 At Anime3000, you can hear an interview with him on their Bonus Round podcast program, as well as the dramatization of a portion of the very first print story, with voice actors performing as Kei (our narrator), Yuri, and a couple of the other characters.  Visit, listen, comment:  if the project is favorably received, there may be more of it!


Historical note --  The stories in the first book, from 1980, had been adapted for audio before, in Japanese in 1990 and 1991, released on cassettes by Asahi Sonorama.  These were performed as full audio productions with voice actors and sound effects -- like a "drama CD" before there were CDs!  Taking up once again their roles in the 1980s anime productions, Yuri was performed by Shimazu Saeko and Kei by Tonguu Kyoko. 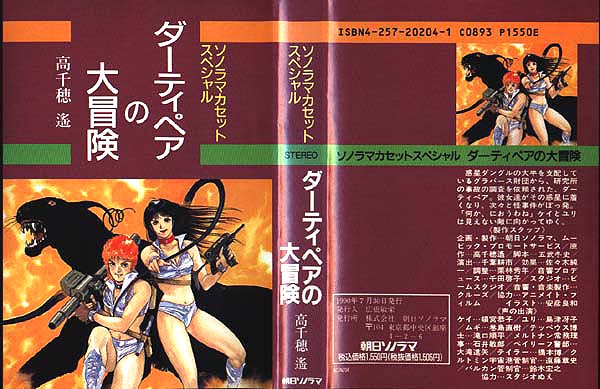 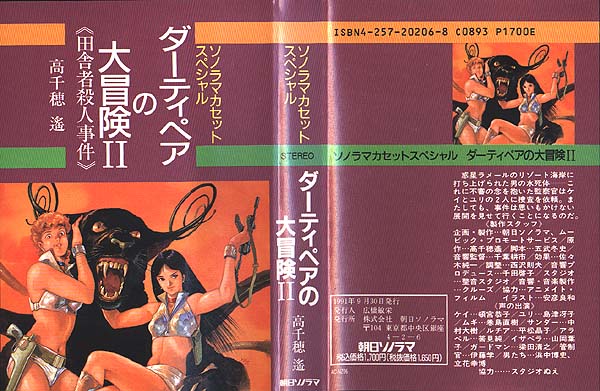 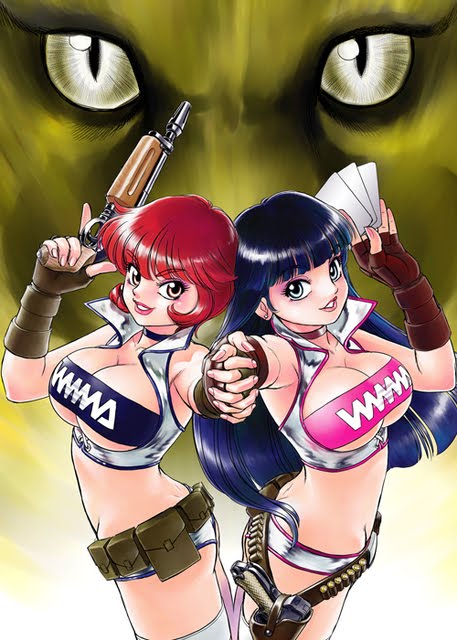 Comic Ryu has been running a manga adaptation of the first DP print story, Daatipea no Daibouken, starting in their May 2010 issue (which was released 19 March).  The story is being handled by Takachiho Haruka himself, and the art by Tamaki Hisao (probably best known in the U.S. for his manga version of Star Wars: A New Hope, the English translation of which was published by Dark Horse*)
*He has been quite active since that time, but not much of his work has been seen in North America 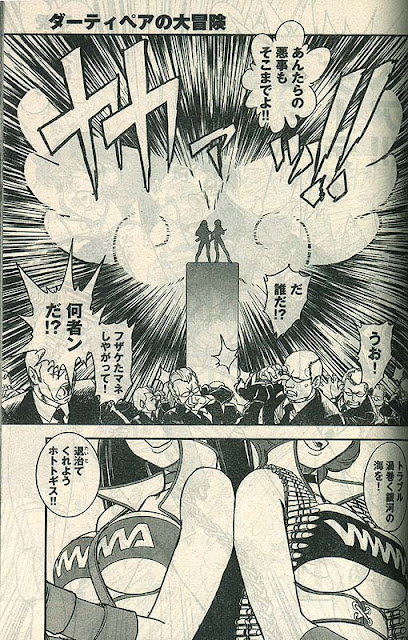 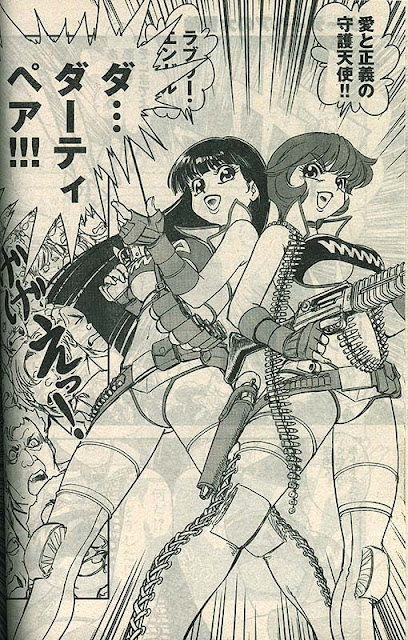 Here's their first appearance in the opening installment, arriving to break up a little party being held by the interstellar crime syndicate, Lucifer.  The sort of stage-set introduction refers back to the Lovely Angels' origins in both the famous wrestling (and singing!) team, the Beauty Pair, as well as female singing duos such as Pink Lady, all from the 1970s. (And I see that they've brought their instruments...)


As one of my correspondents, Tomzer1, points out, their character design draws on something from all of the preceding versions of the Angels, along with Tamaki's own contributions.
The original first story has already concluded, but the series is still underway (with the November issue of Comic Ryu having come out Saturday, 9/18).  From what I can find on Japanese blogs about it, there has been a segue into some other situation.  I'll be able to say more about that when I get my copies of the most recent issues.  (I will also select some pages from the series for posting, once I have the new scanner later this month.)


Historical note -- This is not the first time there has been a DP manga.  However, there had never been anything done as a sanctioned series during the run of the 1980s anime ("Classic") version, with the peculiar exception of an adaptation of the fourth TV episode which ran in a 1985 issue of a Thai fan magazine (which I will also scan eventually).  There were also two series of DP Flash manga (by two different artists) which ran in Dengeki Comic Gao! during 1995-96.
Posted by Nozmo at 10:45 PM No comments:

A little more of the Angels makes its way into English

This is hardly news to many of this blog's likely viewers, since I'm continuing to play catch-up from early '07.  During 2007-08, Dark Horse took up the cause of translating the Dirty Pair print novel series, permitting English-language readers to see two more stories than we'd had before.  The two books are faithful recreations of the original Japanese publications from Hayakawa Bunko, including reproductions of the illustrations by Yasuhiko Yoshikazu.  (There was a separate publication of this book by Kadokawa Bunko in 1983, for which "Yas" did a number of different illustrations, some of which I've shown on this page of my site.*)


*There are still other "Yas" illustrations for the stories that only appeared in SF Magajin, but were not used in the books.  Being cursed as a completist, I suppose I will have to gather up those issues at some point...

The first book, Daatipea no Daibouken <The Dirty Pair's Great Adventure(s)**>, from 1980, included the title novella, a sort of epilogue to that, Sakaba nite (Daati supershyaru) <At A Bar (Dirty Special)>, and a somewhat longer novel, Inakamono Satsujin Jiken <The Case of the Backwoods Murder>, all of which are compiled from their 1979 appearances in SF Magajin.
**Keep in mind that Japanese does not pluralize nouns 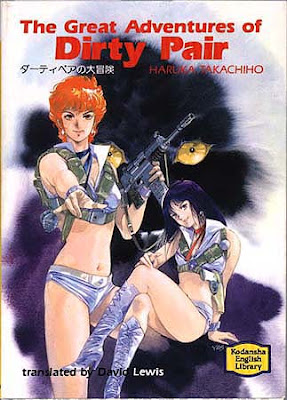 The translation of the first story is essentially identical to the much earlier translation done for the Kodansha English Library in 1987, an extensive series of books in a variety of genres, including many science-fiction works, intended for Japanese students of English (the book includes an appendix explaining various usages of the language in the translated story).  In making a spot check through the books, the only noticeable change I found was that the customary rendering of her name, "Kei", replaces "Kay" in the earlier translation of the first story.  (An odd factual error, which went uncorrected, is that her birthday is given as 27 November in the original Japanese, which became 27 December in the Kodansha translation, and has remained unchanged.)  This last is a minor point:  the translations do a good job of rendering our red-headed narrator's slangy, somewhat self-involved, and occasionally distracted description of the unfolding of events in the story. 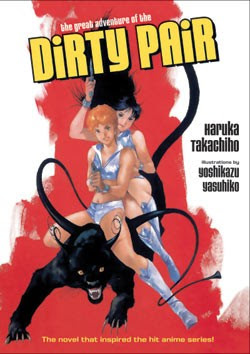 The Dark Horse publication of this first book was released on 22 August 2007 as The Great Adventure of the Dirty Pair.
The second of the DP books, Daatipea no Daigyakuten <The Dirty Pair's Great Return>, followed in 1985, again shortly after serial publication of this novel-length story in SF Magajin during the middle of that year.
As a consequence of there being very little description of the Lovely Angels' experiences outside of the missions themselves, and only two stories available to boot, the 1985 anime series necessarily invented a great many details to provide a satisfactory milieu for the main characters.  Owing also to the standards and practices of broadcast television of the time, some changes were also made in the Angels themselves, so there are notable distinctions between these two versions of Kei and Yuri (opening the door to still more variations of the characters in times to come…). 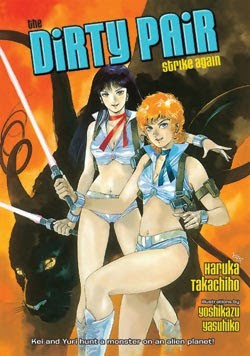 Dark Horse issued its translation, using the English subtitle given in the original Japanese book, The Dirty Pair Strike Again, as the title; this book made its appearance on 12 March 2008.  It is again a nicely-produced recreation of that 1985 book, even including a reproduction of Yasuhiko's fold-out color frontispiece (which you can view, along with a number of his other illustrations here).
Unhappily, these books were not big sellers (as was the case with Adam Warren's comic series for Dark Horse), underscoring the fact that DP continues to have an active, but rather small fandom, yet an influence on various media far out of proportion to its popularity.  So it does not appear that there will be a published English translation of any further books in the series (now up to nine), at least any time soon...
Posted by Nozmo at 10:30 PM No comments:

Email ThisBlogThis!Share to TwitterShare to FacebookShare to Pinterest
Categories: novels

While I wait another couple weeks to get a new scanner, we'll look at what's been doing with DP since I was last able to work on the site in spring 2007.  Takachiho-sensei published the first two-volume Dirty Pair novel (there had been one Crusher Joe two-parter back in 1989-90), with acknowledged influence by American author Robert E. Howard.
The premise is that there are some sort of shady goings-on in a planetary theme-park, involving the interstellar crime syndicate, Lucifer.  The park hosts what is essentially a massive multiplayer role-playing game, based in swords-and-sorcery.  So Kei takes up a sword, Yuri becomes a magic-user, and they must infiltrate the "game" to get to the bottom of whatever it is that is underway and take whatever measures are needed to stop it.
The first part, Daatipea no Daiseifuku <The Dirty Pair's Great Conquest>, appeared in trade paperback on 30 April 2006 (at left below) [which I'd already noted in my old, now deceased blog] and was reissued in regular format on 23 April 2008 (at right below). 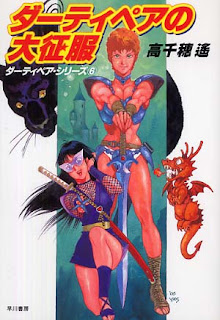 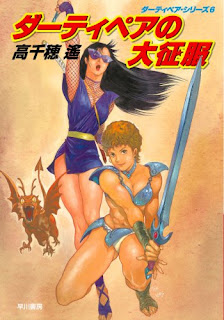 The story concludes in Daatipea no Daiteikoku <The Dirty Pair's Great Empire>, released in trade paperback on 24 October 2007 (left below), then reissued in standard size on 19 March of this year (right below). 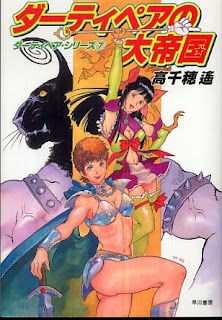 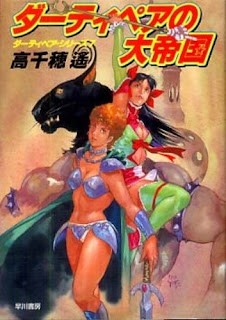 The covers, color frontispieces, and black-and-white interior illustrations are, as always, provided by Yasuhiko Yoshikazu.  (I  will post more of his work from these books on my site once I can scan them.)
Posted by Nozmo at 8:54 PM No comments:

Email ThisBlogThis!Share to TwitterShare to FacebookShare to Pinterest
Categories: novels

That's it! I'm moving the blog!

I have some good news at last -- I have finally been able to get the new computer I've had to put off for three to four years!  (It's horribly expensive to be ill in this country, but it isn't exactly cheap to find out you aren't, to stay that way, or to stay insured…)  So I am now using a machine with literally a dozen times the processor speed of the one I'm leaving behind, with as much RAM as the old one had hard-drive capacity, and some very nice new software.  (Of course, I'll be a while learning how to use it…)  But it looks like I'll be able to return to work on updating and revamping my site.
As if to help burn the bridge behind me, the update I was given to make to my (former) site blog promptly severed the connection to its database.  I was tired of dealing with its cumbersome editor anyway (especially when I wanted to insert a pic), so it was plainly time to start a new blog (and the last entry in the old one was made in 2007, so it's just as well).
I will have a new, compatible scanner later this month and should be able to begin making updates without having to use (stealthily) my computer at work.  So here's hoping for better days ahead!
Posted by Nozmo at 11:07 PM No comments: