More on the Origin Story

Recently, I turned up a comment at David Kelleher's excellent site on A. Bertram Chandler which helped me in possibly clarifying some details about how all this got started.

A(rthur) Bertram Chandler (1912-84) was a science-fiction author of some renown, who was born in England and emigrated to Australia in 1956.  His main line of work was in service as a merchant marine officer, during which time he crewed or commanded a number of ships of various sizes.

He wrote quite a number of short stories and novels, mostly during the '60s and '70s.  He is best known for his "Rim World" series and his numerous stories centered on his recurring protagonist, John Grimes, beginning with his career as a starship officer in the Galactic Federation Survey Service.  Chandler's writing was quite popular (in translation) in Japan.

At the Tokon VI convention at Nikkei Hall in the Otemachi district in Tokyo, during 14 - 15 August 1976, Chandler won the Seiun Award for Best Foreign Language Short Story for his "Wet Paint".  The convention chairman that year was one Takachiho Haruka, a co-founder of Studio Nue (in 1973) and soon to make a reputation for himself with his Crusher Joe light novels. 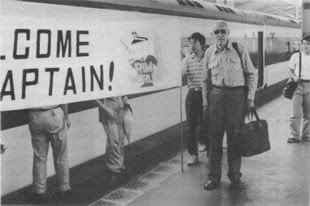 The next Japanese national science fiction convention, during 27 - 28 August 1977, was HinCon I in Yokohama, at which Chandler was the Guest of Honor.  Takachiho, not needing to act as chairman that year, would certainly have had some time to take the honored guest around to see the sights in the area.  So it seems most probably that this was the time during which he was brought to Studio Nue and thence to the women's pro-wrestling match, at which Chandler made the "Dirty Pair" remark that set into motion Takachiho's train of thought. 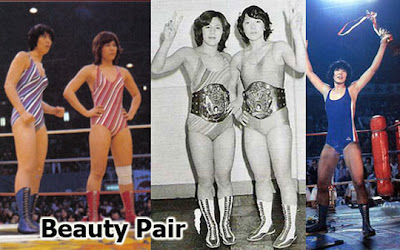 The timing fits with other events of the period.  The famous Beauty Pair, that the Nue contingent came to watch do battle, was at the height of their popularity.  Satou Naoko and Ueda Maki had begun as a team, won, lost, and regained their WWWA title during 1976 and had recently released the first of their musical recordings, "Frolicking Youth" (yes, they were singing wrestlers).  The team disbanded in February of 1979. 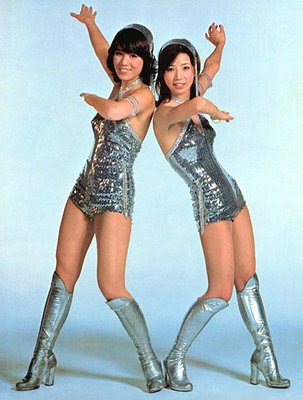 Another of the inspirations for the Lovely Angels was the idol duo, Pink Lady (Nemoto Mitsuyo ["Mie"] and Masuda Keiko ["Kei"]), who also began their performances in 1976 and were still rising toward their peak in 1978.  (I have included a photo of them in their costumes for the song "UFO".)

So it may be safe to say that we can pin down the "birth" of the Lovely Angels to a date around the end of August of 1977.  Their "Great Adventure" first appeared in print, in SF Magajin, eighteen months later.

Chandler continued to write and publish on into the last year of his life in 1984.  He was Professional Guest of Honor (writer) at the 40th World Science Fiction Convention, ChiCon IV, held in Chicago during 2 - 6 September of 1982.

cover of the program book,
by Professional Guest of Honor (artist),
(Frank) Kelly Freas,
with Commodore Chandler perched on the Galactic Rim
Posted by Nozmo at 7:51 PM